Note: this blog has been migrated to Medium, with the articles here available to preserve permalinks Please see this post at https://medium.com/@ianrbuck/bioshock-2-review-99e84369b8bd 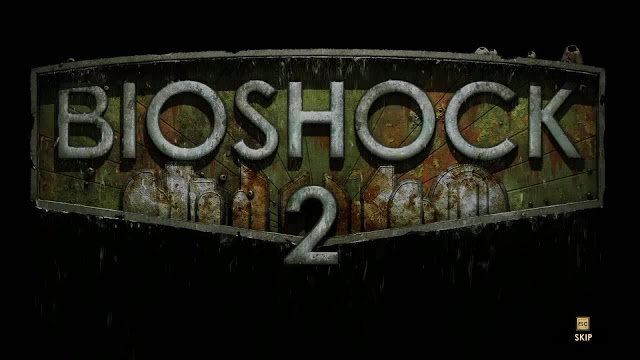 For those of you who have played the original Bioshock, you will be right at home in Bioshock 2. For the rest of you, go play the original Bioshock first; if you don't you will be more than a little confused.
A little background first: both games take place in a city called Rapture located on the floor of the Atlantic Ocean. It was created as a utopia where you could choose your own destiny without the interference of governments or organized religion. As you can imagine this didn't last, and by the time you show up in the first game Rapture has deteriorated into a big free-for-all. The man who created Rapture, Andrew Ryan, serves as the main antagonist in the first game.

The second game takes place eight years after the first one, which is surprising because I can't believe that the city continued to function for that long. You play as a Big Daddy who has been gone from Rapture for ten years. 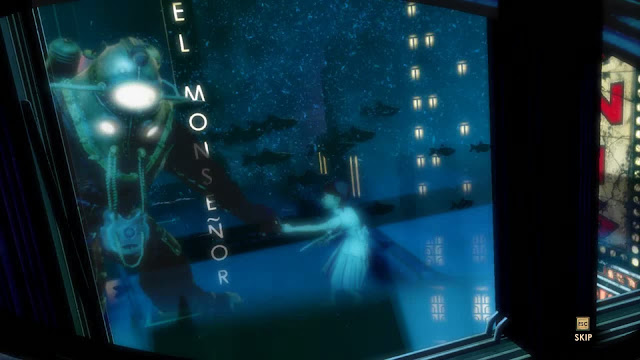 The city is now under the control of a psychiatrist named Sofia Lamb, and you have plenty of reasons to hate her. In direct contrast to Ryan's exaltation of the individual, Lamb is all about everyone working together. I find it interesting that all of these people who came to Rapture specifically for self-determination are suddenly working for Lamb. 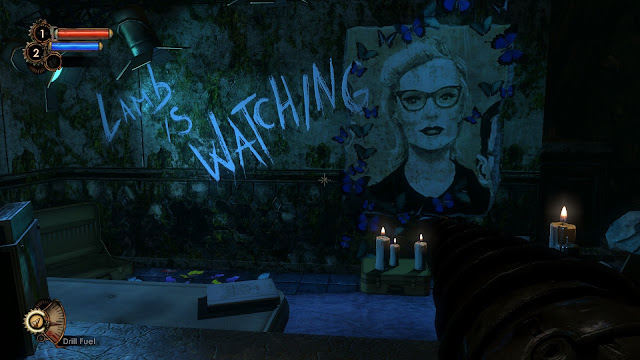 The first game presented the moral choice of what to do with the Little Sisters that you encountered. Little Sisters collected Adam, which is a resource that you use to purchase upgrades and passive abilities. If you decided to harvest a Little Sister you got all of the Adam that she had, but she did not survive the process. If you rescued the Little Sister she would return to being a normal human. 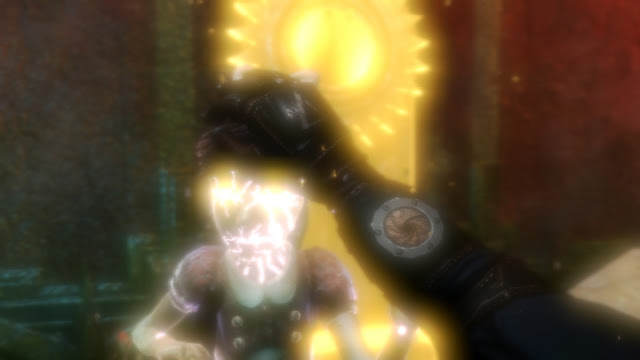 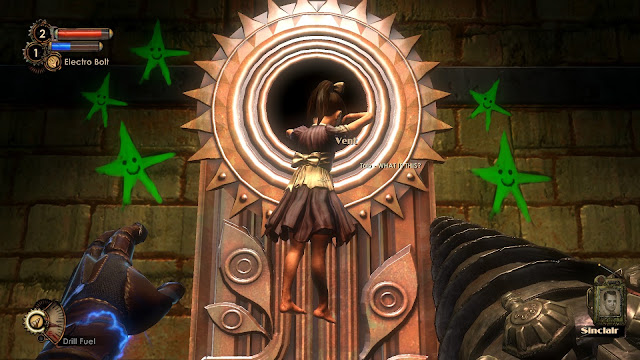 The end cutscene was different based on what you did with the Little Sisters. In Bioshock 2 there was more to it. In addition to deciding whether to harvest or rescue the Little Sisters, there were several characters who you could decide to spare or kill; different situations surround each choice. I have heard that there are something like 12 different endings to the game depending on what you decide to do. This is one of the significant things that they improved over the original game in my opinion.

Other than that though I felt that the story wasn't quite as good as the original. While it wasn't too difficult to understand where Andrew Ryan was coming from when he went on his rants, I really couldn't understand the reasoning behind Sofia Lamb's plan to create a perfect society. Speaking of Ryan, many of the characters and recordings talked about him and their opinions of how he ran things; clearly Rapture was still living in his shadow 8 years later. I felt like Bioshock 2 was similarly living in its predecessor's shadow, especially because the creative minds behind the first game (read: Ken Levine) weren't directly involved in the second.

The area that Bioshock 2 made huge improvements in was the gameplay. In the original game you had to switch between your weapon and plasmid, but in the second you always had both available to you. This alone made battles much more fast-paced and hectic. There was also more variety in enemy types; the splicers are a lot more deformed, presumable due to the extra years since the first game, and there now brute splicers. They aren't quite as tough as Big Daddies but they fill in the gap between weak foes and really tough ones. The scariest enemy that they added was the Big Sister. They come after you sometimes after you have rescued a Little Sister, and they are tough. They use plasmids and melee attacks, and they are extremely nimble. I couldn't get a screenshot of them while they were alive because I was too busy trying to shoot them, but here is a dead one. 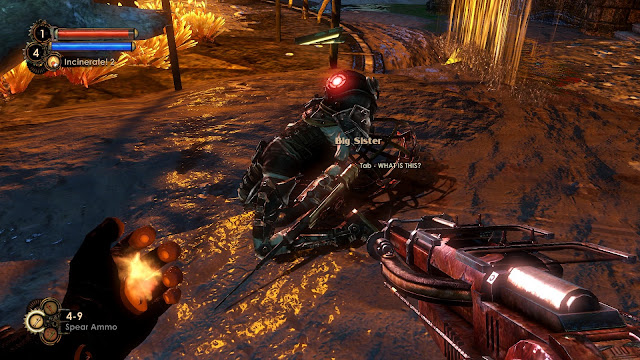 There were new weapons as well: the metal pipe you wielded in the original game is replaced by the Big Daddy's Drill, and I took malicious pleasure in pinning enemies to walls from afar with the new spear gun. 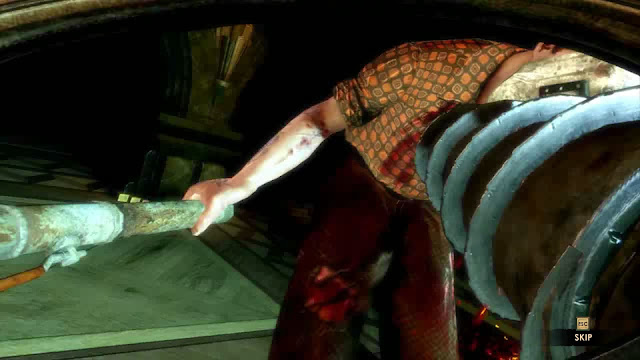 Hacking was also a lot better in Bioshock 2. Instead of a weird Where's My Water? minigame, Bioshock 2 had a moving needle that you had to land in the correct areas to succeed. It was a lot quicker and made a little more sense. They also introduced a remote hacker which made hacking things like security cameras and turrets much easier. As someone who hacked as many things as I possibly could, I appreciated those changes. There was also one upgrade that gave you the ability to repair friendly bots and they each got a name; I loved it because I name all of my electronics in real life, so why not name my virtual electronics as well? 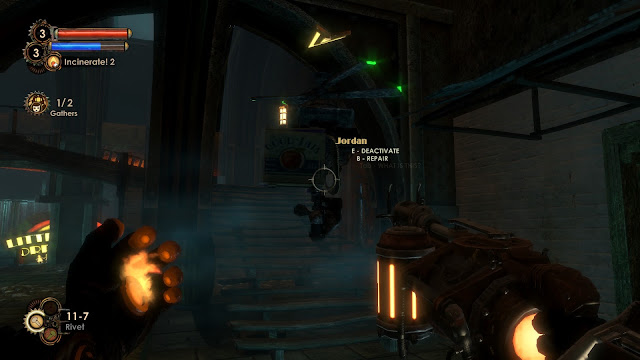 Graphically Bioshock 2 is beautiful. The environment was almost identical to the original, but you can immediately tell the difference when you look at character models from the two games. Thankfully it also looks gorgeous in 3D. There were quite a few times when water would run down the front of my helmet in the game and I would blink to clear my eyes out of reflex. 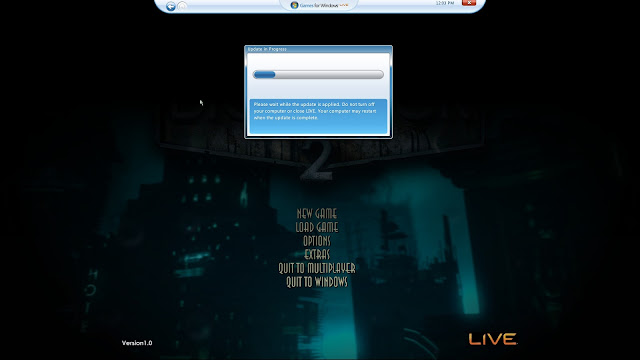 The Bioshocks are the only games that I have played that require Games for Windows Live, and it is pretty obnoxious. When I buy a game from Steam I assume that I am downloading the most up-to-date version. Not so here. Luckily the internet at my house isn't a complete joke anymore so I was able to download the update in about an hour. I'm glad that Bioshock Infinite won't be using anything this silly. 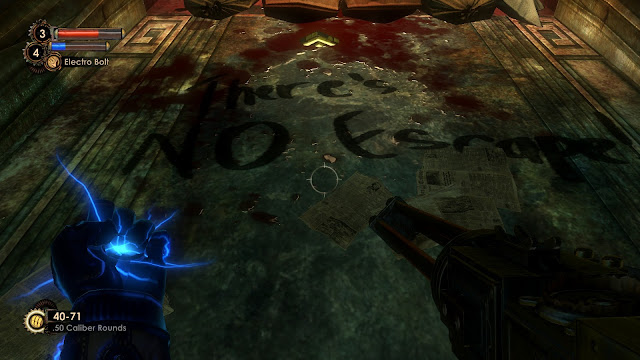 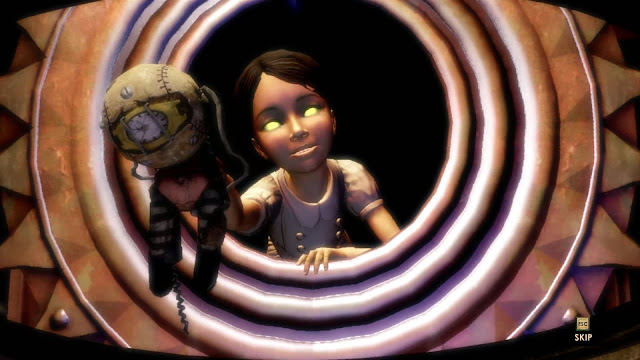 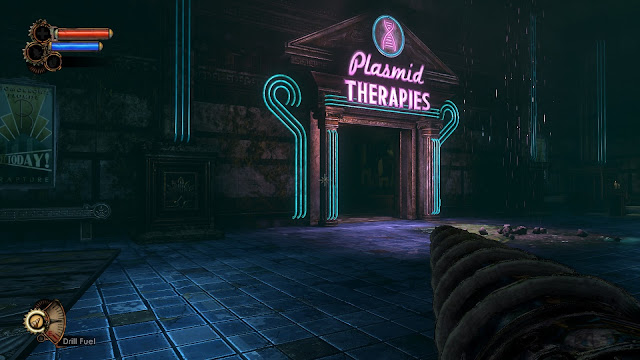 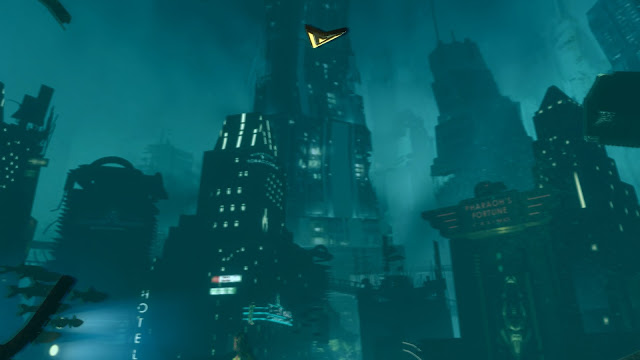 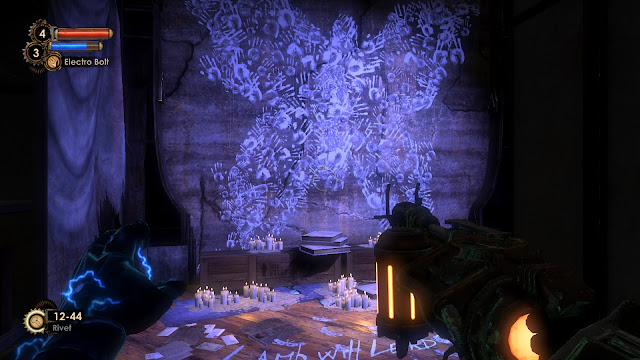 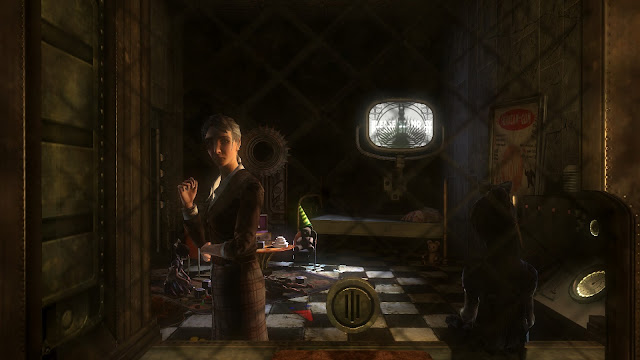 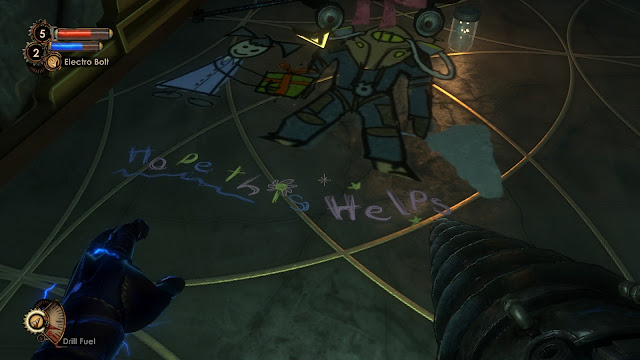 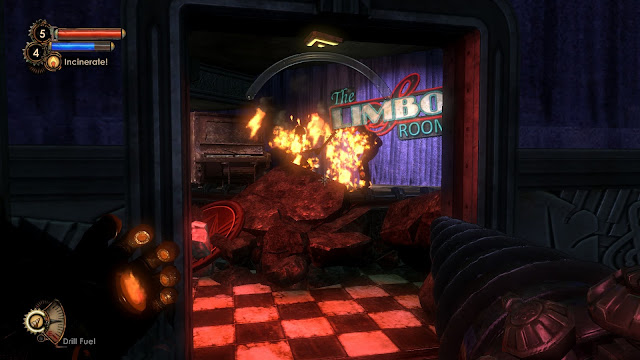 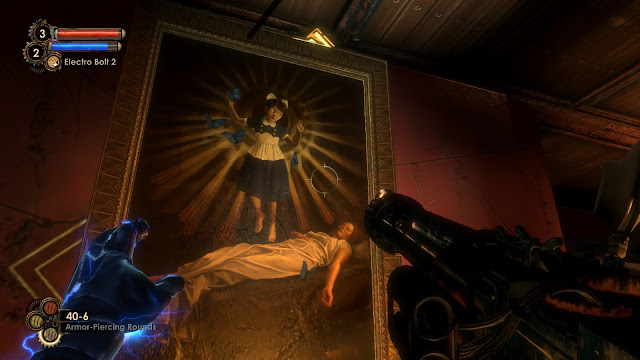 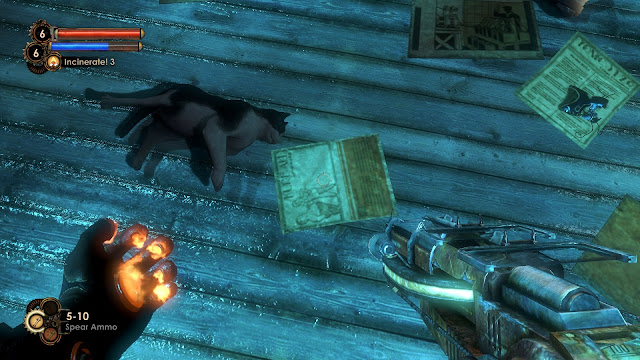 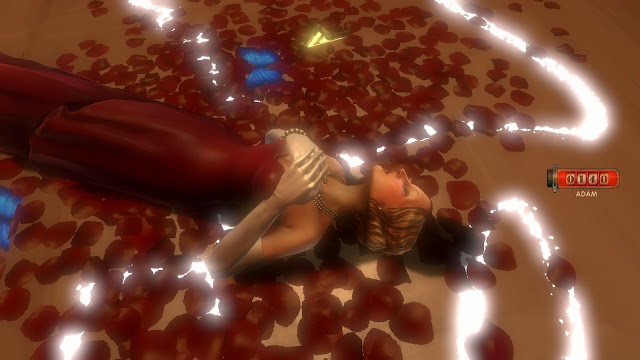 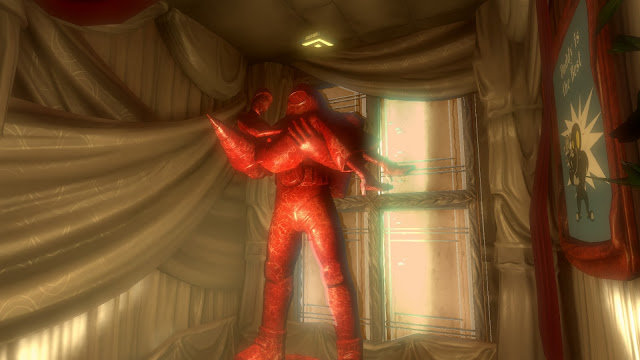 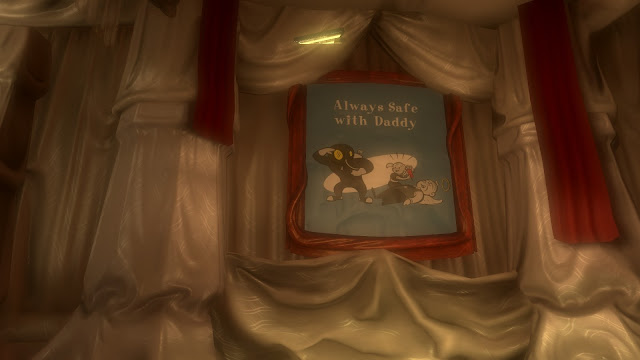 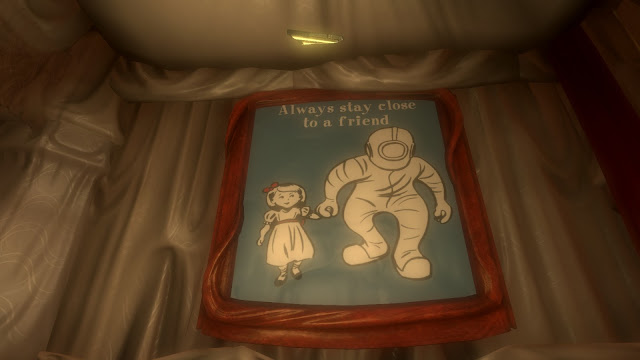 And see all of my screenshots on Steam.
Posted by Ian R Buck at 3:53 PM