Note: this blog has been migrated to Medium, with the articles here available to preserve permalinks. Please see this post at https://medium.com/@ianrbuck/audiosurf-2-first-impressions-868d7a0d093

Note: A "first impressions" is basically like a review, but for a game that isn't finished yet. Depending on how the game changes between now and launch, my final review could be different. 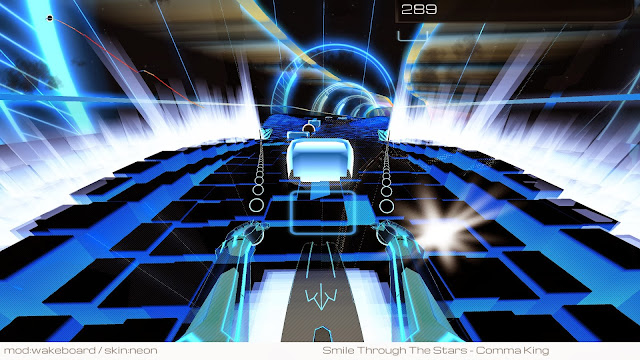 Audiosurf is literally one of my favorite games, so I jumped on the Audiosurf 2 Early Access (read: beta) as soon as it came out. For those of you unfamiliar with Audiosurf, it is a PC game that takes any song you have on your hard drive and creates a course out of it. Whenever the music is fast and exciting, the course is fast and exciting. You get points by gathering blocks as you go down the course.

The main idea behind Audiosurf 2 is to support mods, namely custom modes and visual themes. This is a really cool idea, but I'm not sure it will scale well in an Audiosurf game. My main concern is this: in the original game you choose a character who has a certain special ability. At the end of the song, your score is compared to all of the other scores in the level you chose (so if you chose a Casual character, you would be compared to all of the Casual scores, etc.) In Audiosurf 2 it looks like the scores are only compared within the mode that you choose. What if I find an unofficial mode that somebody made that I really like, but nobody else plays it because it's not built in? On the other hand there is no way for all scores to be compared in any meaningful way because the developers can't guarantee that the scoring systems will be comparable. 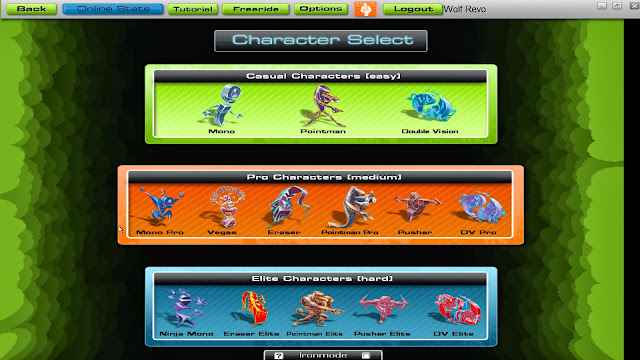 In the original game I started out playing Casual characters, and quickly found that Mono was the best. Eventually I worked up the courage to start playing Pro characters, and I did quite a bit of experimenting until I figured out how to play Eraser well. Unfortunately there is no Eraser mode in Audiosurf 2 (though I am sure it is only a matter of time before somebody makes a mod of it).

Most of the official modes are variants of Wakeboard, which was teased in a couple of trailers a while back. Most of the points you get in Wakeboard modes comes from the jumps and tricks you do. 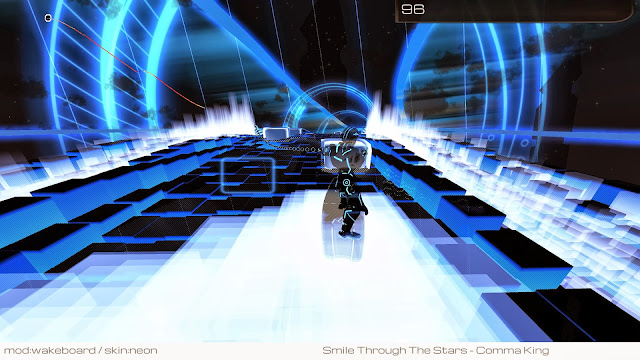 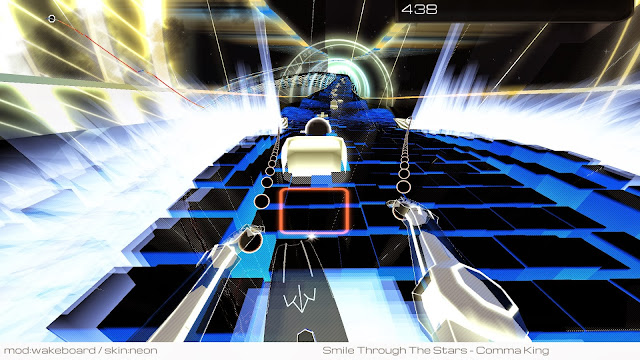 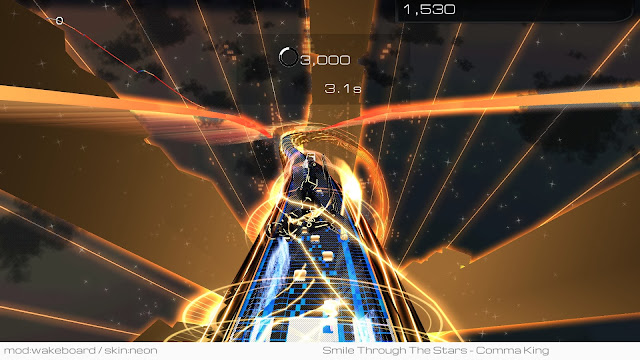 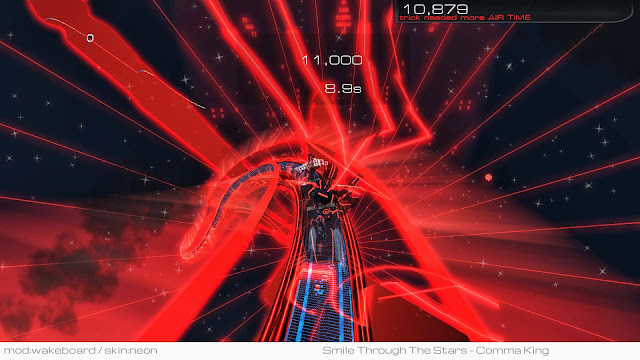 The problem with this is that you have to wait until the song is about to get fast (which happens maybe three times in a song), jump, and push a few buttons to do some tricks. It doesn't feel like it requires much skill on the part of the player, so I've been avoiding the wakeboard modes as much as possible. 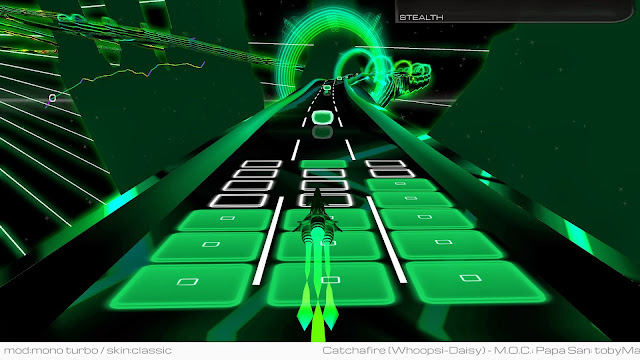 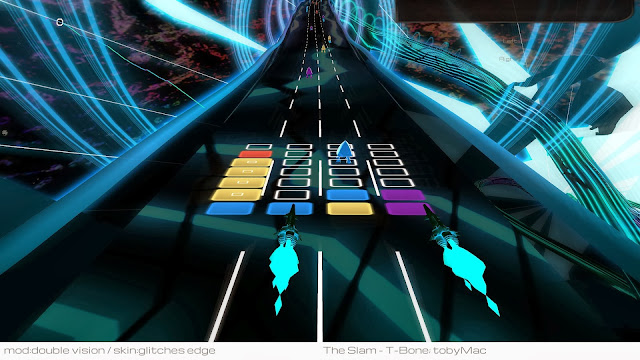 Here you can see a couple of modes that are more similar to the ones in the original game. I felt more at home, but again my favorite character isn't there. Also, playing Double Vision while trying to take screenshots is impossible. 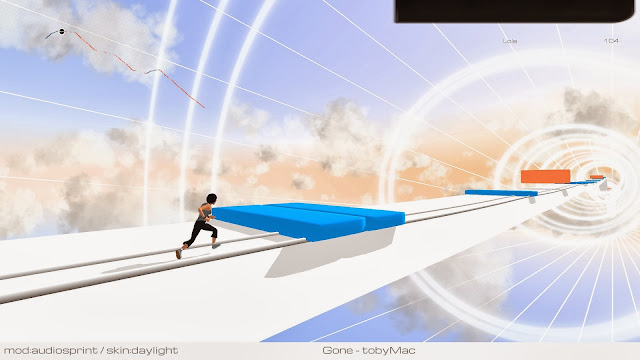 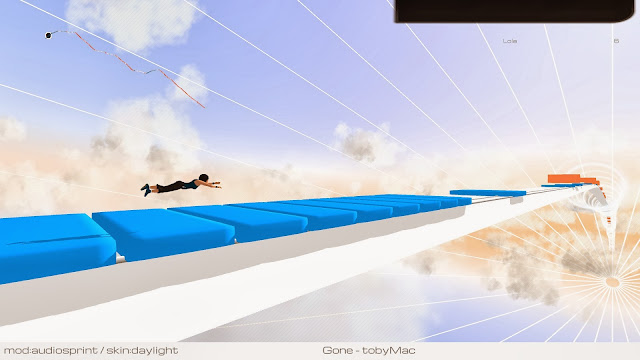 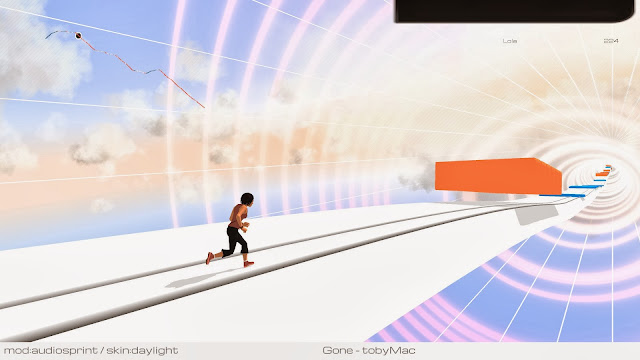 Audiosprint is a good example of what is possible with community-created modes. It's designed to be a party game where you take turns playing. It's pretty simple: either jump over or slide under the obstacles as you pass them. The runner emits this horrible scream every time she hits an obstacle, which is really distracting and will probably make you hit more obstacles. It's pretty hilarious in a group setting, but utterly obnoxious when you are playing by yourself. 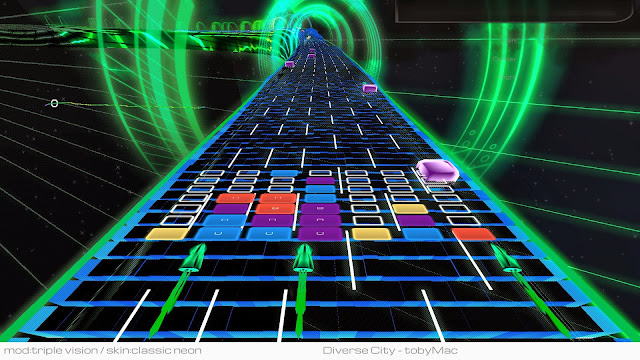 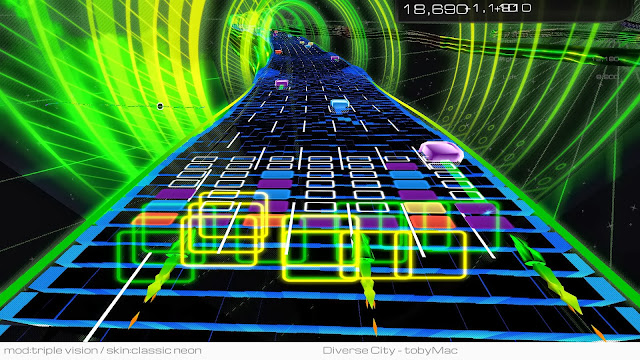 That's right, someone made Triple Vision. My roommate and I played a game of it, but I think it would work best with three people. It also would have helped if we had communicated more on what colors we should go for, because we filled it up quite often and lost a lot of points that way.

At this point Audiosurf 2 is not worth getting. Audiosurf still has lots of people playing it, and you'll be able to compare scores with all of them. If you don't have Audiosurf yet I would highly recommend it; as I said, it is one of my favorite games, and my go-to game if I have a few minutes to chill.
Posted by Ian R Buck at 11:04 PM